Slovakia Racing Agency since its inception in 2010, deals with the organization of motorcycle racing at the circuit. During its existence it has built a quality basic amateur and professional riders not only in Central Europe.

In 2011, the organization started its racing series designed for amateur riders as well called Fun Cup. Since 2012, organized by the by the Slovak Motorcycling Federation (SMF) Slovak Cup Series races and CPM since 2013 Slovak championship series.

IN THE ONSET OF NEW SERIES MOTOCh, WHICH IS BACKED BY THE SLOVAK MOTORCYCLING FEDERATION 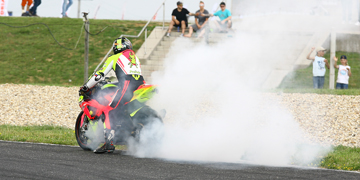 
In the years 2014-2016 the Slovakia Racing Agency on behalf of the European division of the International Motorcycling Federation (FIM Europe) organized series of international Alpe Adria Road Racing Championship. During these three years, the Agency lifted championship to a higher level higher participation of competitors, stronger media coverage, marketing, services and facilities rewards for successful riders.

For 2017, the Agency Slovakia Racing decided to list the total of new international series MOTOCh - Motorcycle Championship, which is backed by the Slovak Motorcycling Federation and part of it will be in addition to the evaluation of international and national championships of the Czech Republic and Slovakia. You will also evaluate the championship MOTOCh national winners of all countries that will be represented by at least three riders in each class. Also in this series, the riders can count on a strong media coverage, service facilities and rewards for success. To start the series events MOTOCh racing licence will be accepted by all countries, which are registered with the federation FIM and FIM Europe.

MOTOCh part of the event will also be accompanying the Cup race IMRC Cup in the classes -600 and +600, where the minimum required national licence with starting permission from the national federation. Within MOTOCh series will be held the championship of the Czech republic.

/ All the sports classes are listed within MOTOch championship

On our page you will find all the details about the series MOTOCh, events calendar, information about entry fee, registration fees paid to successful riders, media support, technical and sports schedules, timetable.